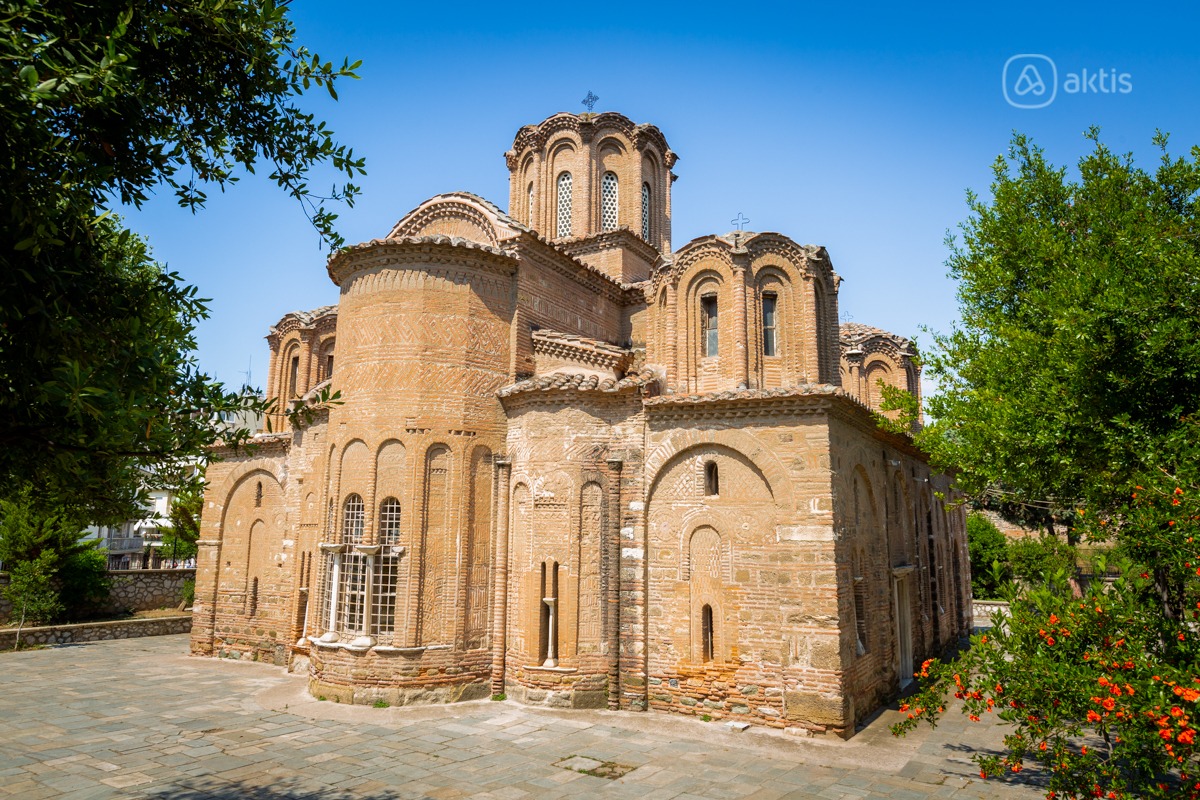 The Agioi Apostoloi Church is one of the major Byzantine monuments in Thessaloniki. Although its history was quite long and eventful, the building managed to preserve original fresco paintings and mosaics, which make it the most impressive church in the entire city

The exact date of the building’s construction is yet unknown. At first, people considered it to be the monument of the XII century. Later, one found the monograms of the patriarch Nifont I during the works on the church renovation. This finding “shifted” the history of the landmark for a few centuries. It turned out that the building appeared in the XIV century. The period of 1310 and 1329 was announced as the foundation date of the church. The ruins of the entrance into the building and the cisterns, set nearby, might be regarded as the evidence that the church was a part of the huge complex. It was probably built as the catholicon of the monastery. According to one of the theories about the appearance of Agioi Apostoloi Church, the materials for its construction were taken from the ruins of earlier buildings.

After the Turks captured the city, they closed the Church of Agioi Apostoloi and other Thessaloniki chapels and converted them into the mosques. For a long time, the fresco paintings of the Agioi Apostoloi Church stayed under the layer of stucco. In 1926, one started restoration works in it. After the earthquake of 1978, the building was reinforced. In 2001, the restoration works of the mosaics saw the end. In 1988, the Church of Agioi Apostoloi entered the UNESCO World Heritage list, alongside other prominent Byzantine and early Christian monuments of the city.

The Church of Agioi Apostoloi features a modern and well-made iconostasis. Here, you can find many revered icons. The icon of the Virgin Mary is one of the major relics of the church. It was painted in the present day.

Navigation in the area

The Church of Agioi Apostoloi in Thessaloniki is the cross-dome type of religious construction. It is devoted to the Feast of the Twelve Apostles. This is due to the legend about twelve domes, which probably adorned the church, symbolizing the twelve apostles. Initially, this building was dedicated to the Virgin Mary. The dome of the church is supported by the four arches and surrounded by smaller domes. The altar area of the Agioi Apostoloi Church provides sections for deacons and a credence table.

The church is of great interest in the view of its interior decoration, which has much in common with the monasteries in Constantinople. Chances are that these buildings were the creatures of the best craftsmen of that period. During a visit to the church, you can see:

Amazing frescoes and mosaics, preserved in the church until present times, are of great historic and artistic value.

The Church of Agioi Apostoloi sits at the beginning of the street Olimpou, near the Western Wall of Thessaloniki. You can reach this place by bus №50, running along the so-called “cultural” (tourist) route. The White Tower of Thessaloniki is the starting and the endpoint of the route. The nearest bus stop is Plateia Antigonidon (Πλατεία Αντιγονιδών). It sits 400 meters away from the church. You can overcome this distance in a 5-minute walk.