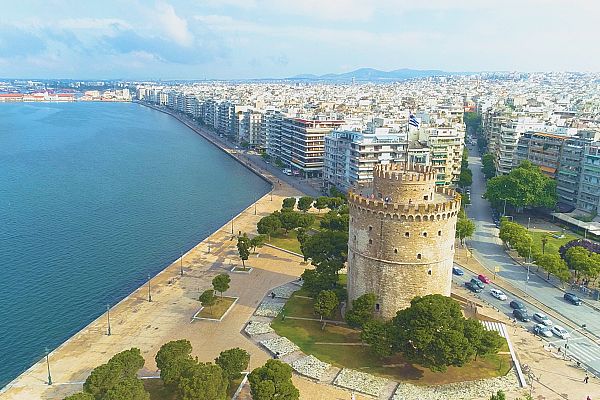 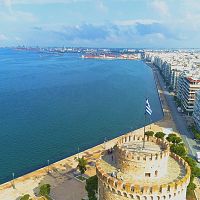 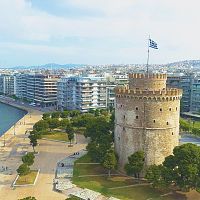 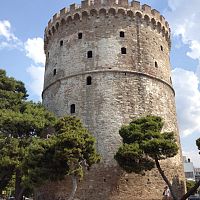 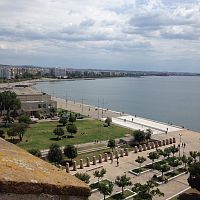 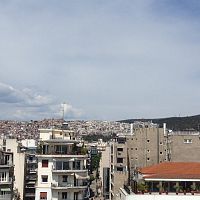 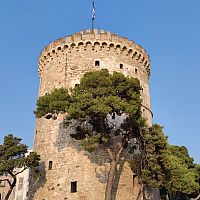 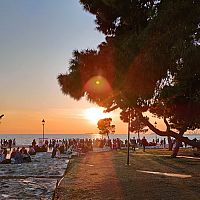 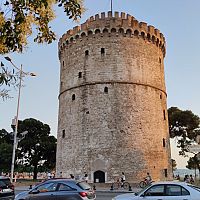 Built by Turks in the XV century as a part of defense fortification, the White Tower has become a real symbol of Thessaloniki and the most recognizable architectural structure in the city.

The spacious terrace on the top of the building offers a fantastic view on the city and the mount Olympus, and on each floor inside the tower there are museum halls, which tell a long and fascinating history of Thessaloniki.

Noticeable from afar off and capturing the eyes of citizens and guests of Thessaloniki, the White Tower reaches 34 meters high and its diameter is almost 22 meters. The building is built of stone and bricks, it has a ground floor and six more attached over it.

The design of the tower is quite unusual — it consists of a cylinder located inside another one that is larger in diameter. The outer cylinder rises until the fifth floor of the tower while the inner one consists of six floors, and thanks to this fact the building has a terrace which serves as a view deck. In the inner part between the cylinders there is a spiral staircase with 92 stair steps, and in the center of each floor there is a round room that is surrounded by small rooms all around except the upper and the lower floors.

The White Tower is an integral part of the history of Thessaloniki. The building was raised in the XV century after the conquest of Thessaloniki be Ottomans. On this place there was another tower which belonged to the Byzantine defense fortifications. The tower was located on the eastern edge of the fortress wall that was built along the sea, another one was located on the western edge and one more tower was situated in the middle of the wall.

Throughout all of time of its existence, the White Tower changed several names. In the XVI century during the rule of Suleiman the Magnificent, the fortification was called “the Lion Tower”. At that period of time the newest weapons such as guns were used to protect the fort — this was said in the inscription at the entrance of the tower, which was lost in 1914. The tower with the invincible weapons was compared with fearless lion who was snorting fire, thus not only the might of the construction itself was celebrated but also the Suleiman’s power.

The XVIII century brought to the Tower the name of Kalamaria, and in the next century there appeared two names at once. The first was “The Janissaries’ Tower” because of the Janissaries garrison located within its walls, and some time later the building got the name of the Bloody Tower. The reason for that was the transformation of the tower into a prison for those who were sentenced to death. After the beginning of the liberation movement against the Ottoman rule, the rebels who were sentenced to death were executed in order for frightening the other rebels. The sentence was carried out on the terrace of the tower, as evidenced by the gunshot and the blood of the prisoners that was flowing down the tower walls and coloring them red. At the end of the XIX century Sultan Abdul Hamit II gave an order to urgently repaint the tower into a white color and never mention it as “bloody” in order the new authority wasn’t associated with tyranny and despotism. One of the prisoners, a Jewish young man called Nathan Gilledi managed to whitewash the whole building himself in exchange for his freedom. From that time, the building got the name of White Tower that is used until now.

When in the 1912 Thessaloniki was liberated from the Ottoman rule, the Tower became a municipal property and was used as a radio beacon, meteorological laboratory of the University if Aristotle, also the artifacts found during the excavations were kept here, and the air defense was carried out in this tower, too. In 1983 the White Tower was transferred to the Ministry of culture of Greece, and since 1994 there is a museum here.

Nowadays the White Tower is not only a wonderful example of surviving greatest historical heritage but also an operating museum of Byzantine culture. Each of 7 floors is occupied by expositions dedicated to Thessaloniki:

The White Tower is located in the center of Thessaloniki and it is 10 minutes’ walk along the seafront from the Aristotle square. Not far from here there is a monument of Alexander the Great. You can get to the outstanding site whether on foot or by transport from any part of the city.

By city buses № 7, 8, 10, 11, 12, 31, 39, 58, you need to get to bus stop Stratigio (it is also called Museum of Byzantine Culture). The buses № 3, 5, 6, 33, 39, 78 stop at the City Hall bus stop. If you are going to the museum by car, keep in mind that due to its location in the city center it is not possible to park the car near the museum. The nearest parking area is on the underground level of the City Hall. Right near the museum, it is possible to park bicycles and motorcycles.

If going to visit the White Tower and the Museum of Byzantine Culture, make sure that you have not chosen one of the holidays — December 25 and 26, January 1, March 25, Easter Sunday or May 1. These days the Museum is closed for visiting. On Good Friday you can visit the Museum from 12.00 to 17.00, and on Easter Saturday it is open from 8.00 to 15.00. On the other holidays the museum is open according to the usual schedule.

In the Museum of Byzantine Culture, as well as in other state museums and archeological sites, there are days when anyone can visit the exhibition halls for free:

Those who are interested in history and wish to visit the most important museums of the city, can buy a joint ticket that gives an opportunity to visit not only the White Tower and the Museum of Byzantine culture, but also archeological monument and museum of Roman Agora, the Galerian Complex and the Archaeological museum of Thessaloniki. The full price of such ticket is €15, reduced one is €8. The ticket is valid during 3 days.